Written by
Rate this item
(0 votes)

Rising energy bills are driving more homeowners into installing solar panels on their roofs. And experts say there is still ‘strong growth potential’, with three fifths of householders said to be considering the option. Demand is being fuelled by solar panels provided through ‘rent-a-roof’ schemes, whereby companies install the system free in return for pocketing payments for the surplus energy that is fed into the National Grid.

Soar in demand: Rising energy bills are driving more homeowners into installing solar panels on their roofs. Demand is being fuelled by 'rent-a-roof' schemes and the Government's Green Deal finance initiative.

However, a quarter of respondents to a survey by market researchers Mintel would either buy the panels themselves to get the feed-in tariff or use the Government’s Green Deal finance scheme.

Claudia Preedy, a Mintel analyst, said: ‘Although the market remains in its infancy, demand for solar panels has exploded since 2010 and there continues to be strong growth potential.

'The market was originally driven by residential roof-top installations, reflecting the introduction of the FIT scheme in April 2010.

'However, in 2013 and particularly during 2014, there was a shift in focus from roof-top to large-scale ground mounted installations.

'These policy changes reflect the current government's desire to see a shift in solar developments from large scale ground-mounted towards mid-scale building-mounted, commercial and industrial onsite generation and domestic deployment.'

Of the homeowners who have solar panels on their roofs, seven out of ten paid for them themselves and only a fifth used the 'rent-a-roof' scheme. 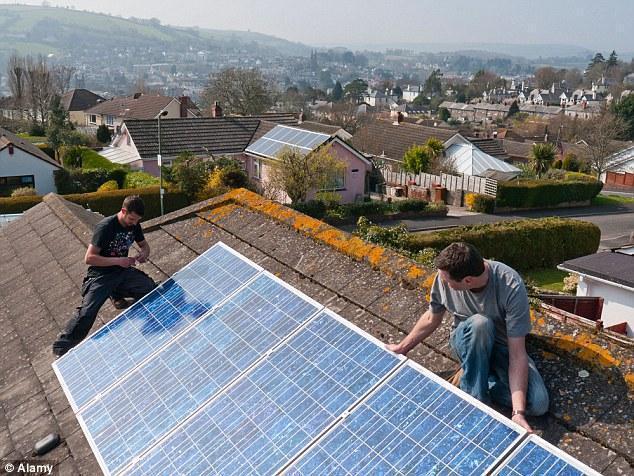 Reaping the benefits: A survey by market researchers Mintel found that of the homeowners who have solar panels on their roofs, seven out of ten paid for them themselves and only a fifth used the rent-a-roof scheme

Not everyone is convinced: Two fifths of those surveyed want nothing to do with the technology, Mintel found, with three out of ten concerned about maintenance costs or believing their roof was not suited

But two fifths want nothing to do with the new technology, with three out of ten believing their roof was not suited or were concerned about replacement or maintenance costs, while a quarter planned to move out before they get the financial investment back.

Only a sixth were concerned about how solar panels affecting housing prices while less than a tenth said they spent not enough time in their home during the day to benefit from the daytime electricity generated by these solar panels.

Ms Preedy added: 'Despite frequent changes in government policy and other factors, such as the strong drop in installation costs in recent years, the solar industry has proved resilient and has shown that it can reinvent itself within a changing landscape.

'The industry is expected to continue to do so in the foreseeable future, even with the uncertainties regarding future government policies.'

More in this category: « Employees without ‘Natural Light’ are More Stressed Cheap Solar lamps help villagers keep their health, and cut emissions »
back to top